Depending on your opinion, Artificial Intelligence is either a threat or the next big thing. Even though its deep learning capabilities are being applied to help solve large problems, like the treatment and prevention of human and genetic disorders, or small problems, like what movie to stream tonight, AI in many of its forms (such as machine learning, deep learning and cognitive computing) is still in its infancy in terms of being adopted to generate software code.

AI is evolving from the stuff of science fiction, research, and limited industry implementations, to adoption across a multitude of fields, including retail, banking, telecoms, insurance, healthcare, and government. However, for the one field ripe for AI adoption – the software industry – progress is curiously slow.

Consider this: why isn’t an industry, which is built on esoteric symbols, machine syntax, and repetitive loops and functions, all-in on automating code?

Software itself needs to do a better job assisting with problem-solving. It should help people do their jobs more effectively and enable companies to innovate and advance. If this is the case, then why is the industry that is driving new AI functionality, such as machine learning, decisioning, and personalisation, lagging in AI’s use?

One reason, quite simply, is fear. Fear of replacement, obsolescence, and of losing control. In our global survey of 845 executives from a range of industries, 72% think the increasing use of AI will dramatically reduce the number of middle managers over the next decade.

Just as automation and technological advances contributed to the elimination of jobs in manufacturing, there is a general fear that AI-based software will replace workers – and even greater fear that AI-based software will assume the role of managers. In fact, four out of five global executives surveyed say they would not be comfortable with an intelligent machine managing them.

We need to stop thinking of AI-based software as “technology versus humans,” and start thinking of the possibilities of technology-plus-human partnerships.

Even though industry executives don’t want to be managed by AI, our survey shows a majority are willing to work alongside it. Eighty-eight per cent of our survey respondents say they are comfortable with the prospect of working alongside intelligent machines, and 91% are comfortable with the prospect of managing intelligent machines.

As the chief executive of a software company, I ask myself, how can we apply current and future AI-based software technology to help workers across all industries work smarter, be more efficient, collaborate better, and achieve their goals?

Low-code development platforms require minimal coding to create or extend an application. But they still require a knowledge of code. To really empower a workforce open to the prospect of smart technology partnerships, we should be moving towards no-code.

It is estimated that 2% of the worldwide population knows how to code. Think about that. Just 2% of the population is creating 100% of the code that is essentially running much of the world. Those developers hold immense power because they make the rules about how we build our systems, use applications, and even read the news that interests us. And unless we know how to change the code, we’re out of luck.

Software development is a closed society. This means we lose the potential value and speed that comes from working more collaboratively with users that know what types of outcomes they need.

Technology is the future, but it’s also a barrier

To make an application accessible, people with accessibility concerns should be involved in the application design process. To prevent race and gender bias in products, a diverse workforce is essential. However, knowing how to code traditionally requires higher education, and access to this education is yet another barrier to inclusion.

In fact, the US Equal Employment Opportunity Commission cites that only about 9% of graduates from the nation’s top computer science programs are from under-represented minority groups. Visual, no-code software can help eliminate the current barriers and expose a greater community of people to high-tech opportunities.

We’re at a tipping point now with the rise of AI, robotic automation, and visual design tools. The foundational knowledge to create self-writing, self-evolving software exists today. In essence, we’re on the forefront of software producing the software, and by extension, the redistribution of power and opportunity.

No-code platforms open up app development to the widest range of users. Visual tools give the average, non-coding person the power to create, and AI automation helps keep the underlying operational language up to date.

For businesses, this means that workers in different roles can collaborate to construct app functionalities in real time. Even complex analytical constructs can be visually modeled, simplifying the incorporation of semi-structured and unstructured data. Projects that once took dozens of programmers, months of time, and tens of thousands (if not millions) of dollars may now only take days, weeks, or months with internal staff.

For the everyday “citizen” users, like a student, an entrepreneur, or the majority of today’s business users, no-code eliminates the hurdles constructed by the tech industry’s closed society and puts the power and possibility of technology into their hands.

So why is software still so dependent on code?

There is a multi-billion dollar global software development and consulting industry that is wracked with worry about code-free platforms. Though coders are only 2% of the population, that 2% represents more than 18 million software developers worldwide – still a significant constituency.

Plus, major corporate, business, academic, and government initiatives around the world have been established to teach everyone how to program. The fear is that no-code software will displace these workers and strip current software developers and IT professionals of their sense of purpose. We’ve seen this fear of change before in other industries.

For example, in the years preceding the introduction of cardiac stents, the standard of care for patients with coronary disease was to undergo bypass surgery. Cardiac surgeons, a very elite group of medical specialists, were the only professionals who could perform this type of surgery. It was time consuming, expensive, and required longer hospital stays and recovery times.

There were clearly concerns about the minimally-invasive stent technology – despite the clinical research that showed how effective they could be – and this group was surely concerned about their professional future. However, innovation won out, and a new branch of medicine called Interventional Cardiology, emerged.

This field includes a suite of minimally-invasive, catheter-based procedures that do not require the specialised skills of a cardiac surgeon, but do require other types of skills. Once the stents were approved by the FDA for use in 1994, they became the default interventional strategy. As a result, over the next decade the rate of cardiac stent procedures increased by more than 60%, and the field of Interventional Cardiology, itself, experienced considerable growth. Cardiac surgeons, by the way, still exist today to treat those that are not good candidates for stents.

That case mirrors what I believe will happen as a result of AI empowered, no-code technology. The software development industry will not go away. In fact, building systems at the scale of the enterprise takes IT expertise. Rather, the function of current IT professionals may shift to one where expertise from past experience will be applied to the benefit of future project management.

In short, instead of a door closing, multiple windows of new opportunity will open. This idea is supported by 64% of our survey respondents, who believe that AI technologies will allow staff to perform more varied roles and enable them to solve problems more effectively.

More importantly, we should focus on the opportunities created when we eliminate code. From a business perspective, visual, no-code platforms allow workers at every level to collaborate and contribute. Imagine enabling a loan officer to provide direct input on how to streamline a small business loan to better serve a customer. No more pages of requirements and months of iterative user testing. No-code platforms will provide immediate feedback and allow workers to co-create and co-design.

Now extend this opportunity to the citizen user. What if anyone with an idea could “design” software to make a business more effective or make an aspect of their life easier? What could we achieve collectively if application development software was designed for everyone’s use – to drive shared opportunities in a rapidly changing world? It stands to reason that accessible, automated, no-code software will accelerate communication, collaboration, job creation, and technological innovations at enormous scale and in ways we can’t yet imagine.

Previous What Is Adversarial Artificial Intelligence And Why Does It Matter?

The Crucial Role Of Machine Learning In Cybersecurity

Seven Steps To Effective AI Adoption For Your Enterprise 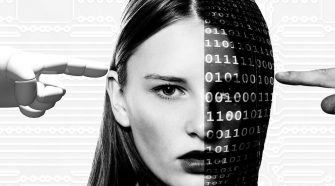