Machine learning has experienced monumental growth in recent years. We are aware of what can be achieved with machine learning more than ever. The increasing amount of high quality data and advancement in computation have further accelerated the prevalence of machine learning.

There is a wide variety of machine learning algorithms that can be grouped in three main categories:

In this article, I will briefly explain 15 popular machine learning algorithms in the supervised and unsupervised categories.

The algoritms we will cover are:

Linear regression is a supervised learning algorithm that models the relationship between a continuous target variable and one or more independent variables by fitting a linear equation to the data.

For a linear regression to be a good choice, there needs to be a linear relation between independent variable(s) and target variable. We can use scatter plots or residual plots to check the linearity.

The following plot shows a linear regression line that tried to model the relationship between speed and dist variables based on the given data points.

Logistic regression is a supervised learning algorithm which is mostly preferred for binary classification tasks such as churn prediction, spam email detection, and ad click predictions.

The core part of logistic regression is the logistic (i.e. sigmoid) function. It takes in any real valued number and maps it to a value between 0 and 1.

Logistic regression model takes a linear equation as input to the sigmoid function and uses log odds to perform a binary classification task.

SVM is a supervised learning algorithm that is mostly used for classification tasks.

If the decision boundary is too close to a support vector, it will be highly sensitive to noises and not generalize well. Even very small changes in features may change the prediction.

A standard SVM tries to separate all data points in different classes and does not allow any points to be misclassified. This results in an overfit model or, in some cases, a decision boundary cannot be found with a standard SVM.

A better alternative is the soft margin SVM which tries to solve an optimization problem with following goals:

The algorithm allows for misclassification of some data points in order to determine a more robust and generalized decision boundary.

Naive Bayes assumes that features are independent of each other and there is no correlation between features. However, this is not the case in real life. This naive assumption of features being uncorrelated is the reason why this algorithm is called “naive”.

As the name suggests, the core element of this algorithm is the Bayes’ theorem.

p(A|B): Probability of event A given event B has already occurred

p(B|A): Probability of event B given event A has already occuured

p(A): Probability of event A

p(B): Probability of event B

Naive Bayes calculates the probability of a class given a set of feature values (i.e. p(yi | x1, x2 , … , xn)). Under the assumption of features being independent, we can use this probability and the Bayes’ Theorem to achieve:

K-nearest neighbors (kNN) is a supervised learning algorithm that can be used to solve both classification and regression tasks. The main idea is that the value or class of a data point is determined by the data points around it.

kNN classifier determines the class of a data point by majority voting principle. For instance, if k is set to 5, the classes of 5 closest points are checked. Prediction is done according to the majority class. Similarly, kNN regression takes the mean value of 5 closest points.

The biggest challenge of kNN is to determine the optimal value for k. Very small k values tend to result in overfitting because the model is too specific to the training set and not generalized well. On the other hand, models with very large k values are not good predictors on both train and test sets. They tend to be underfitting.

kNN is simple and easy to interpret. It does not make any assumption so it can be implemented in non-linear tasks. kNN becomes very slow as the number of data points increases because the model needs to store all data points. Thus, it is also not memory efficient. Another downside of kNN is that it is sensitive to outliers.

The splits are not determined randomly. The ones that result in the highest information gain are selected. Splits that increase the purity of nodes are more informative.

The purity of a node is inversely proportional to the distribution of different classes in that node. The questions to ask are chosen in a way that increases purity or decrease impurity.

The algorithm keeps asking questions until all the nodes are pure. Pure nodes only contains observations of one specific class. However, this would be a too specific model and would not generalize well. Decision tree algorithm can easily be overfit if we do not set a limit on the depth. The depth of a tree is controlled by the max_depth parameter.

Decision tree algorithm usually does not require to normalize or scale features. It is also suitable to work on a mixture of feature data types (continuous, categorical, binary).

In bagging, decision trees are used as parallel estimators. Having many decision trees combined in parallel greatly reduces the risk of overfitting and results in a much more accurate model.

Bootsrapping is randomly selecting samples from training data with replacement. They are called bootstrap samples.

Random forest is a highly accurate model on many different problems and does not require normalization or scaling.

GBDT is a supervised learning algorithm that is built by combining decision trees with a technique called boosting. Thus, GBDT is also an ensemble method.

Boosting means combining a learning algorithm in series to achieve a strong learner from many sequentially connected weak learners.

Each tree attempts to minimize the errors of previous tree. Trees in boosting are weak learners but adding many trees in series and each focusing on the errors from previous one make boosting a highly efficient and accurate model. Unlike bagging, boosting does not involve bootstrap sampling. Every time a new tree is added, it fits on a modified version of initial dataset.

Learning rate and n_estimators are two critical hyperparameters for GBDT. Learning rate, denoted as α, simply means how fast the model learns. Each new tree modifies the overall model. The magnitude of the modification is controlled by learning rate. N_estimator is the number of trees used in the model. If the learning rate is low, we need more trees to train the model. However, we need to be very careful at selecting the number of trees. It creates a high risk of overfitting to use too many trees.

GBDT is very efficient on both classification and regression tasks and provides more accurate predictions compared to random forests. It can handle mixed type of features and no pre-processing is needed. GBDT requires careful tuning of hyperparameters in order to prevent the model from overfitting.

GBDT algorithm is so powerful that there are many upgraded versions of it have been implemented such as XGBOOST, LightGBM, CatBoost.

LightGBM, created by researchers at Microsoft, is an implementation of gradient boosted decision trees.

Decision trees are built by splitting observations (i.e. data instances) based on feature values. This is how a decision tree “learns”. The algorithm looks for the best split which results in the highest information gain.

Finding the best split turns out to be the most time-consuming part of the learning process of decision trees. As the size of data increases, this becomes a bottleneck. LightGBM is aimed to solve this efficiency problem, especially with large datasets.

I will not go in detail but here is a more detailed article that I wrote to explain how LightGBM works.

LightGBM, created by researchers at Yandex, is another implementation of gradient boosted decision trees.

Since we have already covered GBDT, I will only mention the characteristic features of CatBoost.

CatBoost implements a specific version of boosting which is called ordered boosting. It provides a better approach for handling overfitting. CatBoost also has a great performance at handling categorical features. Another distinctive feature is using symmetric trees.

Official documentation and this tutorial provides a comprehensive guide for understanding and using the CatBoost algorithm.

XGBoost is another implementation of GBDT. It was so powerful that it dominated some major kaggle competitions. The goal of XGboost, as stated in its documentation, “is to push the extreme of the computation limits of machines to provide a scalable, portable and accurate library”.

One common feature of XGBoost, LightGBM, and CatBoost is that they require careful tuning of hyperparameters. The performance of models highly depend on selecting the optimal hyperparameter values.

For instance, below is a typical list of hyperparameters for a XGBoost model to solve a multi-class classification task.

The entire list of hyperparameters of XGBoost can be found here.

K-means clustering is an unsupervised learning algorithm. It aims to partition data into k clusters in a way that data points in the same cluster are similar and data points in the different clusters are farther apart. Thus, it is a partition-based clustering technique. Similarity of two points is determined by the distance between them.

It is important to note that this is different than classification where we have attached labels for the data points in the training set. In clustering, the data points do not have labels. The algorithm is expected to find the structure within the data to group data points into clusters.

K-means clustering tries to minimize distances within a cluster and maximize the distance between different clusters.

K-Means clustering is relatively fast and easy to interpret. It is also able to choose the positions of initial centroids (center of cluster) in a smart way that speeds up the convergence.

Agglomerative is the most commonly used approach. Each data point is assumed to be a separate cluster at first. Then the similar clusters are iteratively combined.

One of the advantages of hierarchical clustering is that we do not have to specify the number of clusters beforehand. However, it is not wise to combine all data points into one cluster. We should stop combining clusters at some point.

DBSCAN stands for density-based spatial clustering of applications with noise. It is able to find arbitrary shaped clusters and clusters with noise (i.e. outliers).

The main idea behind DBSCAN is that a point belongs to a cluster if it is close to many points from that cluster.

There are two key parameters of DBSCAN:

Based on these two parameters, points are classified as core point, border point, or outlier:

DBSCAN does not require to specify number of clusters beforehand. It is robust to outliers and able to detect the outliers.

In some cases, determining an appropriate distance of neighborhood (eps) is not easy and it requires domain knowledge.

PCA derives new features by finding the relations among features within a dataset.

PCA is a linear dimensionality reduction algorithm. There are also non-linear methods available.

The principal components are linear combinations of the features of original dataset.

We have covered the most commonly used machine learning algorithms used in the field of data science. I tried to provide a decent introduction for each model. You need to go a little deeper and also practice in order to master each algorithm. 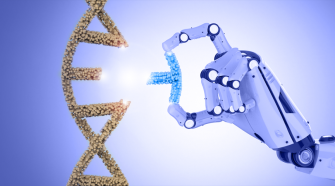