For entrepreneurial MIT students looking to put their skills to work for a greater good, the Media Arts and Sciences class MAS.664 (AI for Impact) has been a destination point. With the onset of the pandemic, that goal came into even sharper focus. Just weeks before the campus shut down in 2020, a team of students from the class launched a project that would make significant strides toward an open-source platform to identify coronavirus exposures without compromising personal privacy.

Their work was at the heart of Safe Paths, one of the earliest contact tracing apps in the United States. The students joined with volunteers from other universities, medical centers, and companies to publish their code, alongside a well-received white paper describing the privacy-preserving, decentralized protocol, all while working with organizations wishing to launch the app within their communities. The app and related software eventually got spun out into the nonprofit PathCheck Foundation, which today engages with public health entities and is providing exposure notifications in Guam, Cyprus, Hawaii, Minnesota, Alabama, and Louisiana.

The formation of Safe Paths demonstrates the special sense among MIT researchers that “we can launch something that can help people around the world,” notes Media Lab Associate Professor Ramesh Raskar, who teaches the class together with Media Lab Professor Alex “Sandy” Pentland and Media Lab Lecturer Joost Bonsen. “To have that kind of passion and ambition — but also the confidence that what you create here can actually be deployed globally — is kind of amazing.”

AI for Impact, created by Pentland, began meeting two decades ago under the course name Development Ventures, and has nurtured multiple thriving businesses. Examples of class ventures that Pentland incubated or co-founded include Dimagi, Cogito, Ginger, Prosperia, and Sanergy.

The aim-high challenge posed to each class is to come up with a business plan that touches a billion people, and it can’t all be in one country, Pentland explains. Not every class effort becomes a business, “but 20 percent to 30 percent of students start something, which is great for an entrepreneur class,” says Pentland.

The numbers behind Dimagi, for instance, are striking. Its core product CommCare has helped front-line health workers provide care for more than 400 million people in more than 130 countries around the world. When it comes to maternal and child care, Dimagi’s platform has registered one in every 110 pregnancies worldwide. This past year, several governments around the world deployed CommCare applications for Covid-19 response — from Sierra Leone and Somalia to New York and Colorado.

The passion behind these and other class ventures points to a central idea of the class, Pentland notes: MIT students are often looking for ways to build entrepreneurial businesses that enable positive social change.

During the spring 2021 class, for example, a number of promising student projects included tools to help residents of poor communities transition to owning their homes rather than renting, and to take better control of their community health.

“It’s clear that the people who are graduating from here want to do something significant with their lives … they want to have an impact on their world,” Pentland says. “This class enables them to meet other people who are interested in doing the same thing, and offers them some help in starting a company to do it.”

Many of the students who join the class come in with a broad set of interests. Guest lectures, case studies of other social entrepreneurship projects, and an introduction to a broad ecosystem of expertise and funding, then helps students to refine their general ideas into specific and viable projects.

A path toward confronting a pandemic

Raskar began co-teaching the class in 2019, and brought a “Big AI” focus to the Development Ventures class, inspired by an AI for Impact team he had set up at his former employer, Facebook. “What I realized is that companies like Google or Facebook or Amazon actually have enough data about all of us that they can solve major problems in our society — climate, transportation, health, and so on,” he says. “This is something we should think about more seriously: how to use AI and data for positive social impact, while protecting privacy.”

Early into the spring 2020 class, as students were beginning to consider their own projects, Raskar approached the class about the emerging coronavirus outbreak. Students like Kristen Vilcans recognized the urgency, and the opportunity. She and 10 other students joined forces to work on a project that would focus on Covid-19.

“Students felt empowered to do something to help tackle the spread of this alarming new virus,” Raskar recalls. “They immediately began to develop data- and AI-based solutions to one of the most critical pieces of addressing a pandemic: halting the chain of infections. They created and launched one of the first digital contact tracing and exposure notification solutions in the U.S., developing an early alert system that engaged the public and protected privacy.”

Raskar looks back on the moment when a core group of students coalesced into a team. “It was very rare for a significant part of the class to just come together saying, ‘let’s do this, right away.’ It became as much a movement as a venture.”

Group discussions soon began to center around an open-source, privacy-first digital set of tools for Covid-19 contact tracing. For the next two weeks, right up to the campus shutdown in March 2020, the team took over two adjacent conference rooms in the Media Lab, and started a Slack messaging channel devoted to the project. As the team members reached out to an ever-wider circle of friends, colleagues, and mentors, the number of participants grew to nearly 1,600 people, coming together virtually from all corners of the world.

Kaushal Jain, a Harvard Business School student who had cross-registered for the spring 2020 class to get to know the MIT ecosystem, was also an early participant in Safe Paths. He wrote up an initial plan for the venture and began working with external organizations to figure out how to structure it into a nonprofit company. Jain eventually became the project’s lead for funding and partnerships.

Vilcans, a graduate student in system design and management, served as Safe Paths’ communications lead through July 2020, while still working a part-time job at Draper Laboratory and taking classes.

“There are these moments when you want to dive in, you want to contribute and you want to work nonstop,” she says, adding that the experience was also a wake-up call on how to manage burnout, and how to balance what you need as a person while contributing to a high-impact team. “That’s important to understand as a leader for the future.”

Jain, too, says the class gave him more than he could have expected.

“I made strong friendships with like-minded people from very different backgrounds,” he says. “One key thing that I learned was to be flexible about the kind of work you want to do. Be open and see if there’s an opportunity, either through crisis or through something that you believe could really change a lot of things in the world. And then just go for it.”

Next If Machines Can Be Inventors, Could AI Soon Monopolise Technology?

Creating Your Own Programming Language

Meeting The Challenges Of Today And Tomorrow With Azure AI 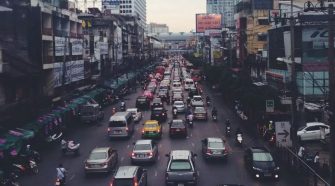