Watching AI movies and other related videos can help gain some insight of an idea to create distinctive products, solutions or projects. If you are an AI lover and like to watch Sci-fi movies during holiday season, then here’s for you.

Here’s the top 7 recommendation for the developer! Enjoy and Happy Holidays!

In the Blade Runner 2049, a holographic human moves freely without projection. This will never happen but a voice assistant with the holographic display is a dream of the human being.

1982 see the Replicant at first in the Blader Runner but at this time, drastic change happened to Replicant. It’s very natural. We cannot differentiate human or replicant. The only way to do is to ask for suspicious one to do Voight-Kampff Test which forces to answer the questions to get something emotional reaction.

Will it be realized that human-like in human beings more? The recent development of XR will enable it to create replicant.

Nathan who is the CEO of Search Engine company has created a female humanoid robot named Ava. Ava is a robot communicating with like a human. Caleb is working as a programmer at his company.

Ava has already passed a simple Turing test which is a test of a machine’s ability to exhibit intelligent behavior equivalent to, or indistinguishable from, that of a human.

Nathan wants Caleb to judge whether Ava is genuinely capable of thought and consciousness and whether he can relate to Ava despite knowing she is artificial.

What inspiring you will be What makes humans human. My brown eyes and Ash colored hair? Or if my body is gone and my heart becomes inside the box, is that human?

This is a very very interesting theme.

This is from French and it’s very very beautiful. This film follows a man who has a relationship with an AI assistant called Samantha. Samantha talked to a man very empathetic voice. From the perspective of technology, conversational AI in AI is now hot and will be next unicorn. But in the movie, the tone which creates a very emotional relationship is very difficult to create right now. The more voice assistant develops and 5G comes, it will be.

Season1: The entire history of you

Driver-less car with holographic assistant helps human. Also, at the same time, people record every moment from implanted eye and ear. So we can look back after the meeting. Moreover, in the security check, the guard re-plays the past and the image recognition system detects and investigates the purpose or something of danger.

This is the most favorite drama among the Black Mirror.

The main characters live in a walled-off society where people forced to be matched into relationships; all these kinds of romantic relationships have expiration dates that can be revealed if both partners choose. So two of them agreed to do that, and the time comes, they will break up according to the AI assistant “coach”. It means if you are matched with the bad man, you need to be with him until the expiration date will come.

So basically people are completely controlled by Coach.

I, Robot is originally a novel written by American writer Isaac Asimov. Based on the three rules of the robot, the humanoid robot serves to humanity.

Do you remember the rule?

A robot must obey the orders given it by human beings except where such orders would conflict with the First Law.

A robot must protect its own existence as long as such protection does not conflict with the First or Second Laws.

Beautiful Computer Graphics made me very excited when I was a child. Elon Musk repeatedly says “A.I. is more dangerous than nuclear weapons”. This is the thing.

This French movie is a very near future, and some part of them are happening right now. In the OSMOSIS, Esther isn’t interested in love and she actually has sex in the virtual reality. It’s crazy but I know some people do that now.

This story is about Love. You may use the Tinder or something dating apps. OSMOSIS helps people find a person who matches a hundred percent, it’s a kind of soulmate. This AI direct human’s intrinsic decision. I felt this is odd to trust the system but it’s happening on Tinder.

HBO’s comedy “Silicon Valley” is very hot in the Valley. Actually, it’s not about AI. But in the dram season5, Conversational AI is stepping into the drama and it is a very very real thing. The Eklow Labs create an AI robot called Fiona which can make a conversation with a human and it detects emotion from human expression and voice. Every time human moves, Fiona’s face move where human moves. It reminds me of Big Brother which monitor human thoughts. It’s totally dystopia!

Next The Ghost Of Christmas Yet To Come: How An AI ‘SantaNet’ Might End Up Destroying The World 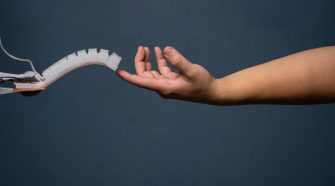