The next generation of purpose-built Azure HPC virtual machines

Today, we are excited to announce two new virtual machines (VMs) that deliver more performance, value-adding innovation, and cost-effectiveness to every Azure HPC customer. The all-new HX-series and HBv4-series VMs are coming soon to the East US region, and thereafter to the South Central US, West US3, and West Europe regions. These new VMs are optimized for a variety of HPC workloads such as computational fluid dynamics (CFD), finite element analysis, frontend and backend electronic design automation (EDA), rendering, molecular dynamics, computational geoscience, weather simulation, AI inference, and financial risk analysis.

Innovative technologies to help HPC customers where it matters most

HX and HBv4 VMs are packed with new and innovative technologies that maximize performance and minimize total HPC spend, including:

Below are preliminary benchmarks from the preview of HBv4 and HX series VMs using 4th Gen AMD EPYC processors across several common HPC applications and domains. For comparison, performance information is also included from Azure’s most recent H-series (HBv3-series with Milan-X processors), as well as a 4-year-old HPC-optimized server commonly found in many on-premises datacenters (represented here by Azure HC-series with Skylake processors).

Figure 1: Performance comparison of HBv4/HX-series in Preview to HBv3-series and four-year-old server technology in an HPC-optimized configuration across diverse workloads and scientific domains.

Learn more about the performance of HBv4 and HX-series VMs with 4th Gen EPYC CPUs.

Azure HBv3 VMs with 3rd Gen AMD EPYC™ processors with AMD 3D V-cache™ Technology already deliver impressive levels of HPC performance, scaling MPI workloads up to 27x higher than other clouds, surpassing many of the leading supercomputers in the world, and offering the disruptive value proposition of faster time to solution with lower total cost. Unsurprisingly, the response from customers and partners has been phenomenal. With the introduction of HBv4 series VMs, Azure is raising the bar yet again—this time across an even greater diversity of memory performance-bound, compute-bound, and massively parallel workloads.

In Azure, we strive to deliver the best platform for silicon design, both now and far into the future. Azure HBv3 VMs, featuring 3rd Gen AMD EPYC processors with AMD 3D V-cache Technology, are a significant step toward this objective, offering the highest performance and total cost effectiveness in the public cloud for small and medium memory EDA workloads. With the introduction of HX-series VMs, Azure is enhancing its differentiation with a VM purpose-built for even larger models becoming commonplace among chip designers targeting 3, 4, and 5 nanometer processes.

HX VMs will feature 3x more RAM than any prior H-series VM, up to nearly 60 GB of RAM per core, and constrained cores VM sizes to help silicon design customers maximize ROI of their per-core commercial licensing investments.

Microsoft and AMD share a vision for a new era of high-performance computing in the cloud: one defined by constant improvements to the critical research and business workloads that matter most to our customers. Azure continues to collaborate with AMD to make this vision a reality by raising the bar on the performance, scalability, and value we deliver with every release of Azure H-series VMs.

Learn more about the performance of HBv4 and HX-series VMs with 4th Gen EPYC CPUs.

Next Addressing Climate Risks In Africa With AI And Hybrid Cloud 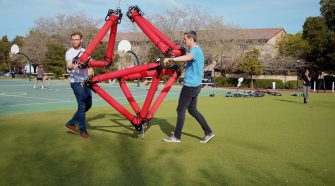