Science as we’ve come to understand it today – that is, conducting experiments using a hypothesis-testing method – has existed only since about the 17th century. But the Homo sapiens brain has been around since the Pleistocene, so how is it that we’ve gotten so good at the kind of science we do in such a short amount of time? In this interview with Robert Lawrence Kuhn from the PBS series Closer to Truth, the US psychologist and philosopher Alison Gopnik argues that scientific skills, including making statistical inferences and testing our environments through trial and error, are implicit in children, even those as young as 20 months. Drawing on research conducted at her laboratory at the University of California, Berkley, Gopnik believes that the fundamentals of scientific thinking appear in humans just about as soon as we start to speak. In other words, as she puts it: ‘It’s not that children are little scientists, it’s actually that scientists are big children.’

Video by Closer to Truth

Previous Light, A Possible Solution For A Sustainable Artificial Intelligence

What Are The Ethical Consequences Of Immortality Technology? 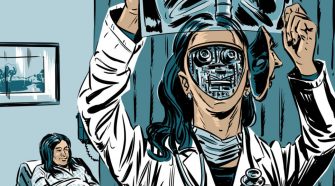