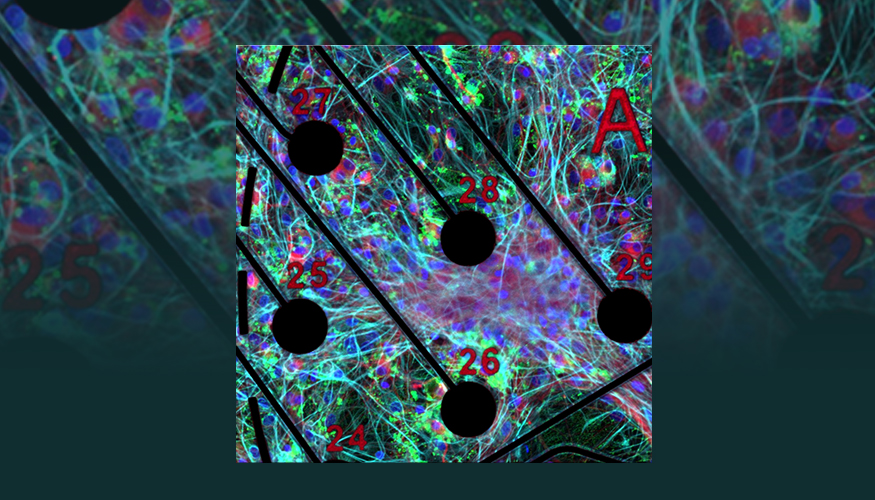 A Lawrence Livermore National Laboratory team cultured rodent-derived neurons on microelectrode arrays and allowed the cultures to form networks, supplementing them with astrocytes and oligodendrocytes — cell types that play a critical role in neuronal health and function. Pictured is an immunofluorescence image of a complex culture, showing neurons (stained red), astrocytes (cyan) and oligodendrocytes (green).

Lawrence Livermore National Laboratory (LLNL) researchers have increased the complexity of neuronal cultures grown on microelectrode arrays, a key step toward more accurately reproducing the cellular composition of the human brain outside the body.

As described in a recently published paper in Scientific Reports, an LLNL team led by biomedical scientist Heather Enright cultured rodent-derived neurons on microelectrode arrays on a two-dimensional “brain-on-chip” device. They allowed the neuronal cultures to form networks, supplementing them with other cell types found in the brain — astrocytes and oligodendrocytes — which play a critical role in neuronal health and function.

For more than a month in culture, the team monitored the neurons’ electrical activity and characterized their molecular profile as they grew and matured over time. Researchers said the study establishes key differences between neuronal cultures of varying complexity, which will allow them to more accurately mimic the behavior of an animal brain in three-dimensional in vitro devices.

“It was clear from what we had done in the earlier work that we needed to enhance the cellular complexity of these devices to more accurately recapitulate the function of the brain in an animal system,” Enright said. “The goal was to include these other key cell types in ratios that were relevant. We hypothesized that the neurons in these complex cultures would behave similarly as they do in the brain, and we did see some indication of that.”

Using the 2D device, researchers found that when compared to a neuron-only culture, the three-cell-type culture exhibited earlier synapse and neuronal network maturity including synchronized bursting activity (cell to cell communication), taking roughly about half the time than that of neuron-only efforts. Researchers said the result is significant because, in addition to enhancing the cellular complexity of their current system, data can be generated faster and at lower costs.

“Something inherent for primary cultures is that their functional activity is quite variable when neurons are cultured by themselves,” Enright said. “Including these other cell types not only resulted in a more relevant in vitro system but one in which we can test compounds of interest earlier with less variability. This greatly improves the throughput and the quality of data generated from the devices.”

Researchers will apply the findings to LLNL’s brain-on-a-chip device, part of a Lab Strategic Initiative aimed at recapitulating the human brain outside the body in 3D to test the impact of chemical agents on neural activity and develop human-relevant countermeasures without the need for animal models. Other advancements on the project were published earlier this year on computational modeling of the dynamics of neuronal cell cultures over time, the development of a 3D microelectrode array (3DMEA) platform for recording neural activity of living brain cell cultures and optimizing cell encapsulation to support 3D neuronal cultures.

The project’s principal investigator, biomedical scientist Nick Fischer, said the ability to create more complex neuronal cultures that are reproducible and provide a more accurate response is important to realizing a fully functional 3D brain-on-a-chip. While researchers are “still very far away” from reproducing an actual brain outside of the human body, they are making significant headway in the effort, he said.

“The goal is to develop assays that will help in understanding these chemicals and their effects on human-relevant neuronal systems and to incorporate these assays into the development of countermeasures,” Fischer said. “Before we can even design appropriate assays, we need to develop neuronal cultures that will more accurately reflect the physiology and function that we observe in vivo. There is a tremendous amount of basic science that ultimately supports the applied research, and I think our findings will be valuable to LLNL’s ongoing efforts as well as the broader neuroscience community.”