We all need a bit of escapism sometimes, and there’s nothing like a blast from the pop-culture past to do the trick. Today, we’re bringing characters from classic Japanese anime, games and TV shows to life — from Pac-Man to Hello Kitty — with augmented reality (AR) in Search.

Japan’s anime and video game culture emerged between the 1950s and the 1980s, as comic books, gaming arcades and home TVs and consoles boomed. But it wasn’t just a Japanese phenomenon. The most iconic characters caught people’s imaginations around the world, and they’re still hugely popular today.

When it comes to the broader trends, anime wins out. It’s more popular than video games worldwide, with interest for anime climbing to its highest peak on record in the past month. That’s pretty amazing — and in fact, search interest for “anime sugoi” (or “anime is amazing”) has spiked 2,300% in the past five years globally.

Now, you can have these characters do their cute thing right in front of your eyes. Take a break to watch ghosts chasing after Pac-Man or Gundam swoop in your living room! Characters that are viewable in AR include Evangelion, Hello Kitty, Gomora, Gundam, Pac-Man and Ultraman. (For die-hard otaku who can read Japanese, check out our Japanese blog with the full list.)

Search for one of the characters on Google using a mobile device and tap “View in 3D” to rotate or zoom in and see it up close. You can then bring the characters from outer space into your space with AR and turn up your volume to hear Hello Kitty deliver a cute message, or Pac-man’s retro sound effects.

You can also create AR videos — or recreate your favorite scenes — with the recording option. Don’t forget to tag your photos and videos on social with #Google3D.

Next Satellites And AI Have Just Accurately Counted 1.8b Trees In West Africa

How An AI Brain With Only One Neuron Could Surpass Humans 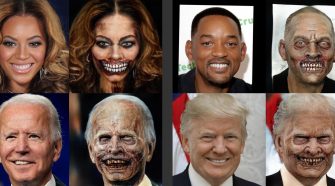 Zombify Your Face For Halloween With This Creepy AI App